Of all of Scarlet Briar’s minions, the most deadly is perhaps not the alliances she forged but the reverse-engineered inventions she had unleashed upon the world. From steam creature technology to Watchknights and even the Pact’s Holomancy, Scarlet had stolen and re-designed dozens of technological revolutions into monstrosities and weapons of horror.

Born from Steam and Made to Defend 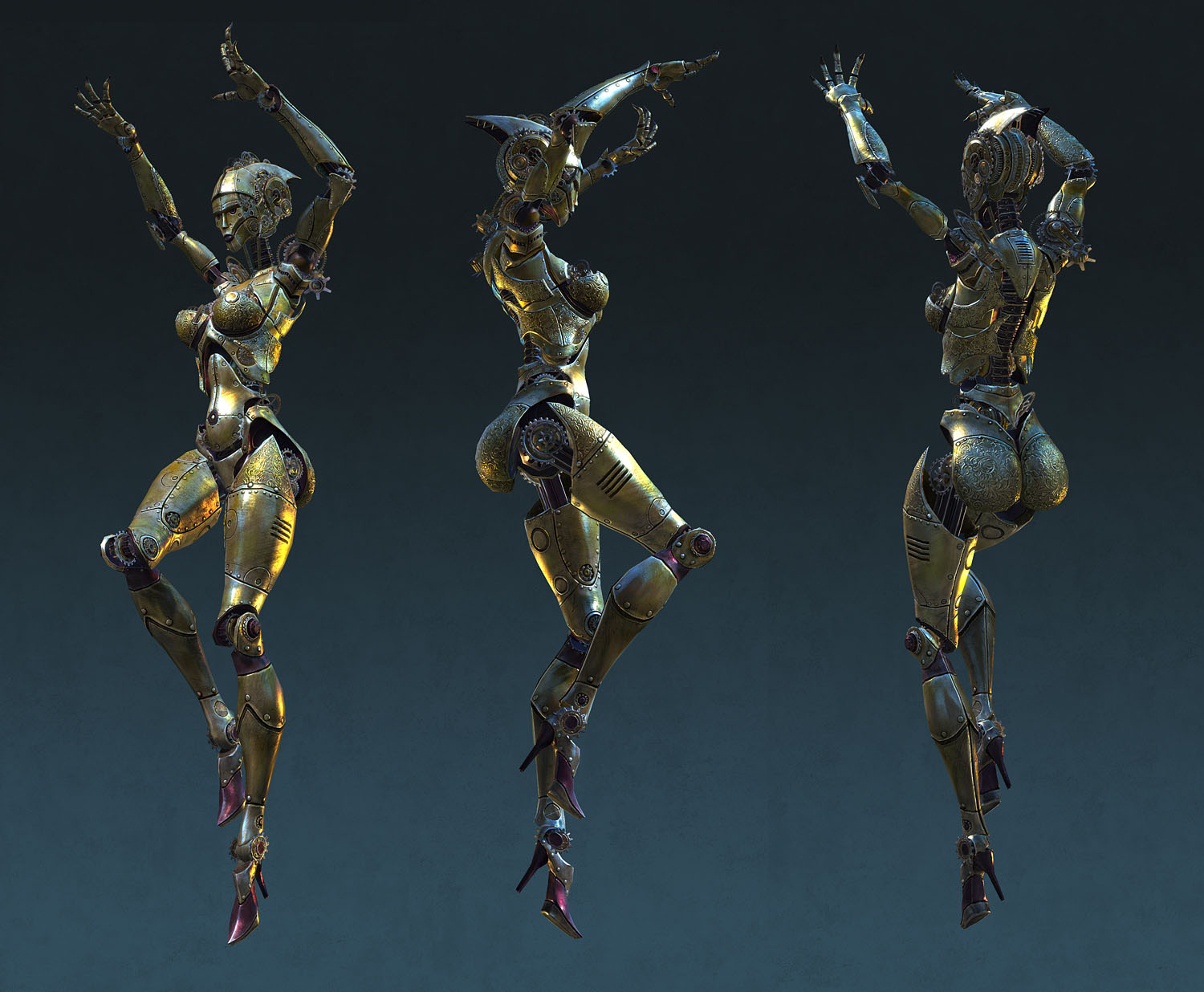 In the valleys of Lornar’s Pass, an odd occurence runs rampant. Biomechanical creatures of steel and steam come forth from portals looking of electricity and created by steam. These ‘steam creatures’ are of unknown origin, purpose, and creator. Reports, however, do claim that they twice appeared from windows into the potential future created by an asuran device known as the Infinity Ball, meant to foretell the possible futures, and that the second time they did so, their creator – a “Grand High Sovereign” asura that conquered Tyria in this very potential future – stepped through as well to conquer the past.

Whether that holds true for these other steam creatures remains unknown. But study of the killed steam creatures have held interesting results. Human engineers had reverse engineered them to further humanity’s own technology, and the result was the Watchknights. Though their being made from studying the steam creatures was kept secret until recently, this was the very beginning of the calamity at the Queen’s Jubilee. 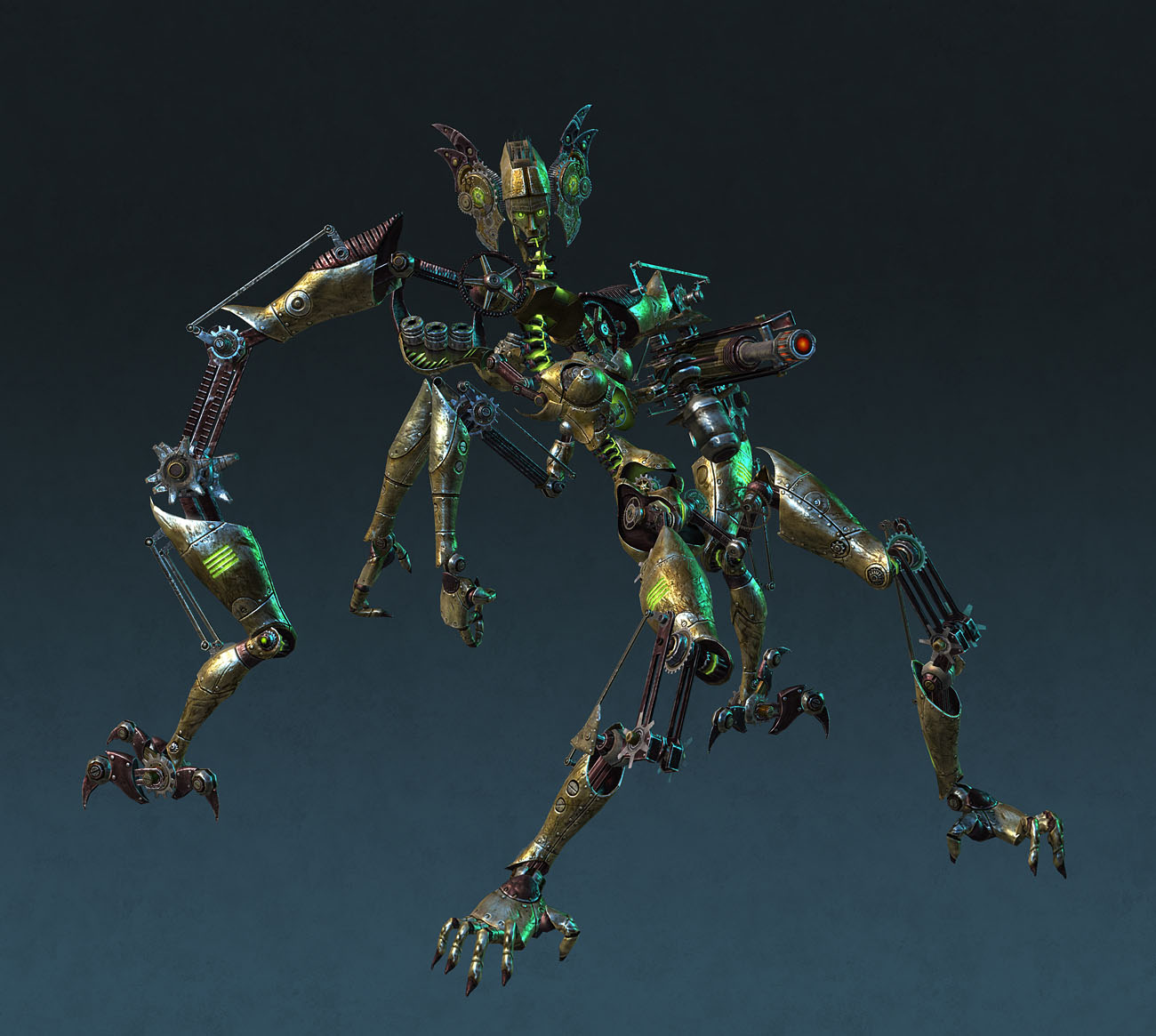 The theme of the Queen’s Jubilee was ‘humanity can withstand any test’. This brought about the attention of the sylvari known as Scarlet Briar – formerly Ceara. Being an engineer herself, she was obsessed with testing things, and saw the theme as a taunt, thus deciding to test them herself. And she did this by hijacking the Watchknights.

Having studied and reverse engineered the steam creatures' technologies herself – the source for her teleportation technologies – she was easily able to figure out that the Watchknights responded to voice commands, and in turn how to alter the commands. And from this, she stole the Watchknights, deconstructing and reconstructing them into monstrosities dubbed Twisted Watchworks. Scarlet then used these Twisted Watchworks as the main fighting force to assault the continent of Tyria from Divinity’s Reach to Ebonhawke, accompanied by groups of her own steam creatures, Molten Alliance, and Aethrblade forces.

After the attack on the Jubilee and unleashing her Twisted Watchworks on the continent, Scarlet Briar improved her machines once more in the beginning of 1327 AE. Returning to the original design of the Watchknights in mockery of Queen Jennah, Scarlet Briar unleashed her Twisted Marionette – a giant female-human-shaped machine that towered above the peaks of Lornar’s Pass. Dangling from five large chains controlled by a circular airship with a portal in the center (what would later become her drill known as the Breachmaker), the Marionette was announced to be a weapon testing of a powerful Aethercannon capable of wiping out the entire area. 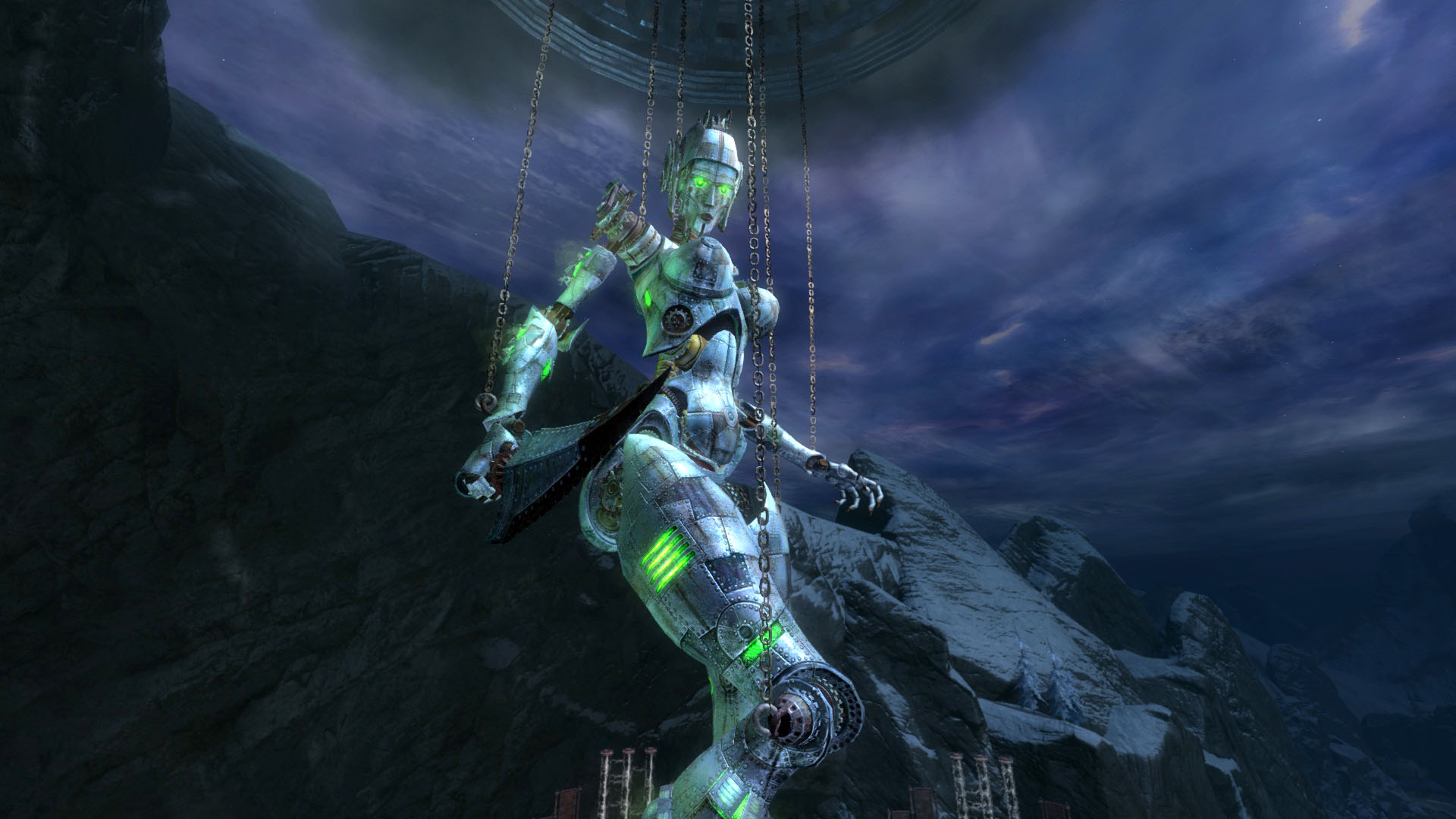 Despite Scarlet’s claims, however, the Marionette does not seem to have been a weapon test. Not fully, at least. This “aethercannon” never appeared, even if the Marionette succeeded in charging, the Marionette simply self-destructed - and indeed killing individuals in a large area but not as large as threatened by Scarlet or the aethercannon (on a side: it should be noted that the Marionette was fought only once, and defeated in said confrontation, from a lore standpoint). Rox presented the theory that Scarlet’s goal was to simply thin the herd – the herd being the heroes of Tyria. And given that the Marionette has not returned either, this very well may be.

The last advancement of the Twisted Watchworks and other machines on Scarlet’s side comes in the form of the Assault Knights. This, perhaps, may be the results of the “weapon test” with the Marionette if there ever truly was such a test, for they appear much like the Watchknights and Marionette, though a side in-between the two and with modifications. Perhaps to help support the weight of the Assault Knights’ bodies instead of with chains, Scarlet had equipped each of the three Assault Knights with a jetpack and bladed “wing” set. They are fully capable of flying – and hovering for extended periods of times – on these jetpacks, and the blades coming from it shift in their movement, folding into themselves or spreading like wings. And lastly, they were equipped with aetherized hammers to pummel their opponents down.

Creations of Light Made Physical 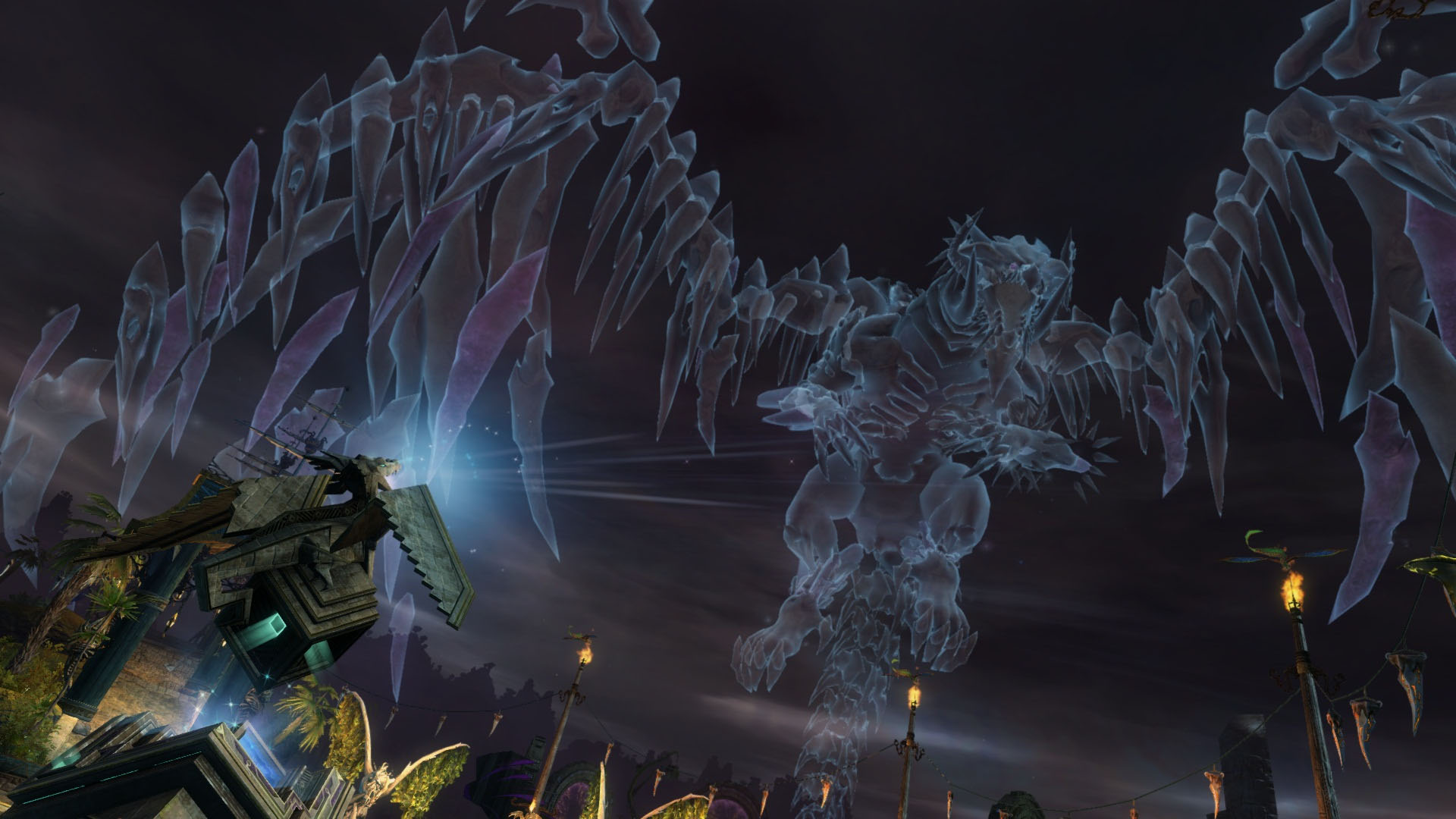 Like many of her inventions, Scarlet did not create combative holograms. Being a master of reverse engineering and modifying, she stole the usage of holograms from others. The first recorded use of a hologram in combat originates in the Pact’s offensive in Orr, where former arena announcer Elli utilized a hologram program originally designed for ampliphying her voice and showing an enlarged version of herself was modified by Whispers Agent Zott to be capable of affecting corporeal entities – and thus fight Risen with minimal risk of corruption and injury.

Similar technology was used by Lion’s Arch during the festival of Dragon Bash (which originates from the ancient Canthan holiday of Dragon Festival and altered to be about fighting Elder Dragons rather than revering the Celestial Dragon) where the Captain’s Council employed holoprojectors to create false dragon minions across the continent. It is unknown if these holograms were based off of Elli and Zott’s hologram devices, or someone else’s invention in the same direction. When the Aetherblades assaulted the dragon effigy ceremony and killed Captain Theo Ashford, they also began ransacking these holograms, stealing the projectors for unknown purposes at the time.

The purposes became revealed months later when an Aetherblade Shipyard constructing their airships was discovered, and within were holographic projectors, creating holograms of the very Aetherblades that inhabited the complex. Like all of Scarlet’s stolen inventions, these holograms were also altered: where the Dragon Bash holograms would simply disappear when ‘killed’, these holograms were far more violent in that they self-destructed, damaging all nearby.

However, other than Scarlet utilizing a hologram of herself as a recording device – something hinted that she had even before Dragon Bash and used both as a journal and as a means to taunt her enemies – she showed no further means of utilizing holomancy (as it is dubbed) until her final assault. 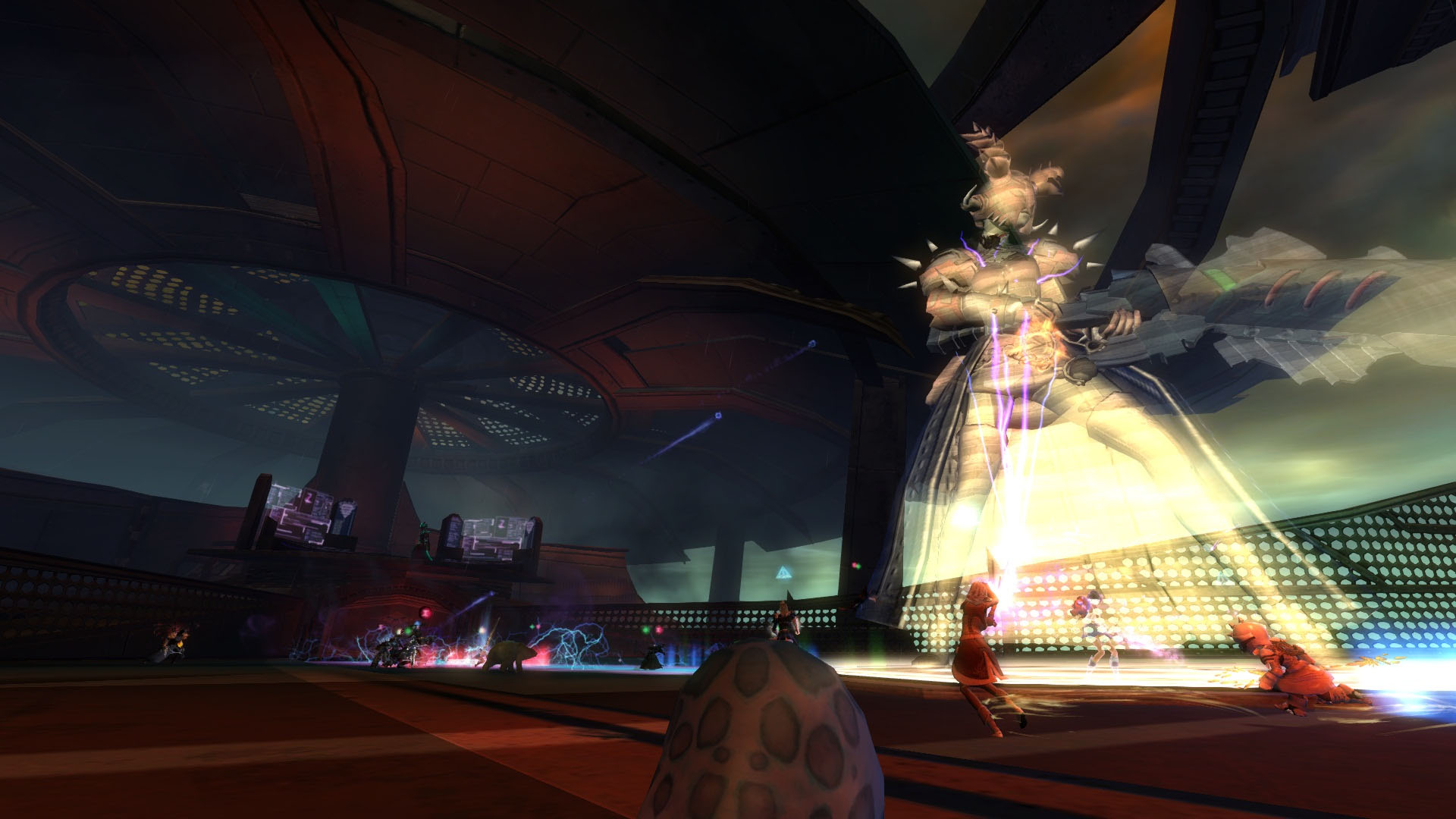 On top of the airship drill, The Breachmaker, Scarlet’s final defenses are perhaps her strongest invention yet. Claimed by Scarlet to be the best of holomancy, the Breachmaker was defended by the Prime Hologram – a gargantuan white hologram of herself equipped with a powerful energy cannon. The Prime Hologram was also capable of dividing into three smaller holograms – one named after each of the asuran colleges – and from there, capable of dividing again into more microholograms. Furthermore, if recombined it became ultraviolet, capable of producing microholograms while retaining its own form, and was equipped with a variation of the aethercannon that was far more powerful than the standard (perhaps this derived from the Marionette testing as well as the Assault Knights). To boot, the hologram appears to have been powered by both light energy and dark energy – though what either of these actually are remains unclear.

The one drawback of the Prime Hologram was that it was forced to be stationary – though, interestingly enough, the microholograms were not. And once the Prime Hologram’s final ultraviolet form was defeated, the whiplash struck Scarlet Briar herself, crippling her and forcing her to retreat into The Breachmaker, where she met her ultimate end.