Fire from the Ground: The Molten Alliance
LORE
Written by Konig

In the northern lands of the Shiverpeaks and Ascalon, the weather unleashed itself uncontrollably. Snowstorms raged and dust storms bellowed, and steam erupted from the ground. What many thought to be the activities of the Elder Dragon Primordus turned out to be something far more mundane, and yet far less predictable: the Molten Alliance.

The Molten Alliance is the combined forces of dredge and Flame Legion, utilizing sonic technology and fire magic to create devastating new weaponry. They appeared suddenly, capable of working behind the scenes and gather forces and weaponry due to the Orders’ preoccupation with the Elder Dragons and the Pact’s invasion of Orr, and struck disastrous blows against both norn and charr. Though Wayfarer Foothills and Diessa Plateau took the brunt of the assaults, the Molten Alliance’s attacks spread even into Snowden Drifts, Plains of Ashford, and Iron Marches.

Though stopped before they could succeed in their ultimate plan, the Molten Alliance had enslaved charr and norn alike to mine out the newly discovered azurite gemstones, and melt them down into new magic-conducting metal ingots. They mixed flame magic with sound-inducing technologies to create weapons capable of sending whirls of flame to devastate their foes. All of this in the hopes of lying siege to Hoelbrak and the Black Citadel, the largest homes of their native foes.

Oppressed People of the Depths

The known history of the dredge is one of only 250 years of age, approximately. At the beginning of our records on the race of bipedal mole-like beings, they lived underground and enslaved to the Stone Summit, a faction of dwarves led by Dagnar Stonepate. When the Stone Summit’s civil war with Deldrimor ended in their defeat in 1072 AE, many dredge gained freedom, though others were taken north by the exiled Stone Summit, where they gained said freedom six years later. In time, the dredge took the Stone Summit’s main base of operations, Sorrow’s Furnace, as their own and renamed it Sorrow’s Embrace – and they took many other dwarven ruins as they expanded their growing civilization.

In recent years, however, while preaching the freedom of the dredge race and marching ever more into the surface lands – as well as deeper below, becoming dangerously close to the destroyers of Primordus – their government underwent a covered up coup d’état as War Minister Shukov and his promoted generals took control of the moletariate (the government of the dredge formed by the leaders of the revolution that freed them). And Shukov’s first move was enlisting the aid of the Inquest, and enslaving his people through statements of “patriotism through labor,” while harnessing the destroyers’ power. This led to another revolt – one that killed Shukov and many of his generals, with the intent of the moletariate being reborn.

However, whether the revolution ended or not, is unknown. And then Scarlet Briar came, convincing the moletariate (new or old is unclear) to join forces with the Flame Legion – and they agreed.

The Charr Who Seek Godhood

The history of the Flame Legion is far larger, but only the past 450 years is of importance. Until roughly around 870 AE, charr were seeking out gods to call their own in hopes of reclaiming Ascalon; this stopped when the Burnt Warband of the Flame Legion discovered the titans at the volcano Hrangmer, and the shaman caste (comprised of all legions but Flame held the most numbers) adopted them as their much-desired gods. In 1070 AE, Ascalon burned in the Searing, but two years later their so-called gods were slaughtered before the charr’s very eyes, and a revolt began a year later, led by Pyre Fierceshot. This revolt ended with the act of his grandchild, Kalla Scorchrazor, by uniting enslaved females, Iron Legion, and Blood Legion, and defeating the Flame Legion on the Plains of Golghein. A battle that would cost Kalla’s life in the aftermath. But the Flame Legion were beaten, and forced into the Blazeridge to lick their wounds – surviving only by the other three legions turning on themselves for control of the lands.

In recent years, the Flame Legion returned led by Imperator Gaheron Baelfire, who had discovered magic to make him nearly invincible as well as having the Eternal Flame (which allows resurrection of the dead, an art long lost) in his possession, and thus obtaining the near-god-like status that the Flame Legion, and perhaps all charr in the distant past, desired. But even then, with the combined forces of Priory, Whispers, and Vigil, led by Pact Commanders and the Destiny’s Edge members Logan Thackeray and Rytlock Brimstone, Gaheron was toppled, and the Flame Legion fell into civil war amongst the Tribunes and those attempting to resurrect Gaheron about who would take leadership.

And with their backs to the wall, fighting themselves and enemy alike, Scarlet Briar came, offering a faction of the Flame Legion technology to crush their foes. They accepted, with their own ulterior motives in mind.

From the Depths of Deception

The exact details of how Scarlet appeared before the dredge and Flame Legion are still unknown. She appeared before a faction of both groups, rather than the whole, and offered to them what they needed.

Scarlet Briar had approached the dredge in a similar manner. She knew that they required fire magic, and had promised the Flame Legion’s magic, claiming that they worked for her already. The dredge, desperate for power, agreed. Though typically the dredge are xenophobic, they view the sylvari in higher regard than other races (asura and sylvari are the only races hinted at being viewed nicely by the dredge), and it was their faction’s desperation that led them to agree to work with the suppressing Flame Legion. What, if any, plans they had for after getting their worth from the alliance remains unknown.

To both groups, Scarlet had lied. She promised each side that the other had already agreed, though they did not. After the Molten Alliance was formed, they realized they were betrayed, but as they were already working together, they did not let the issue last. Though other issues, the two groups’ dislike for each other amongst them, did not settle so easily. As the two groups continued working together, ties stressed and individuals on both sides disagreed with giving their secrets – from the Flame Legion, the Baelfire ritual; from the dredge, the sonic technology – to the other side. Those dissenters were all killed swiftly.

With Sonic Flame, They Came 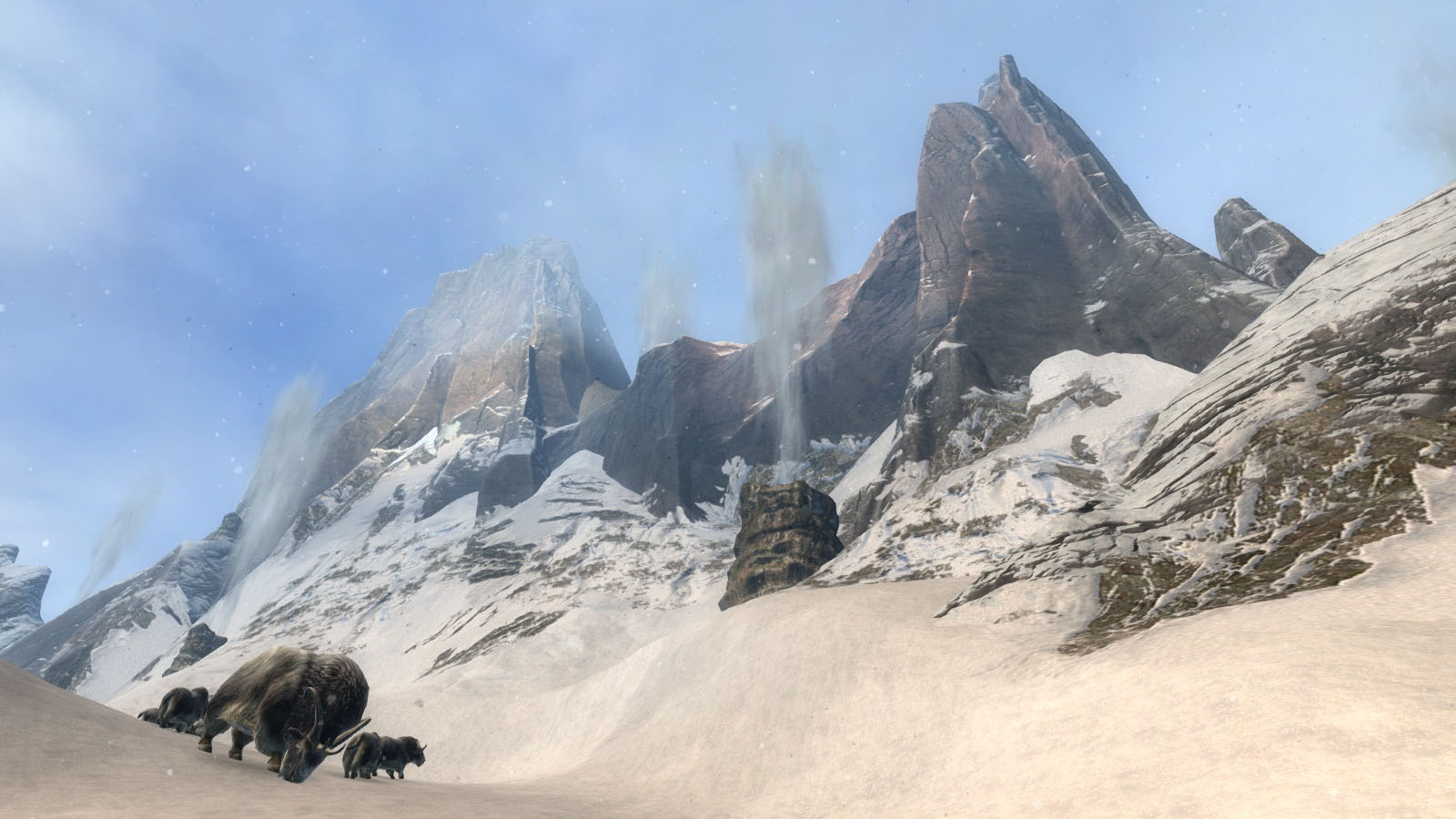 The first appearance of the Molten Alliance was in the beginning of the Season of the Zephyr in 1326 AE, months after the defeat of The Elder Dragon Zhaitan. They have been working together underground after the deaths of War Minister Shukov and Imperator Gaheron Baelfire. The first evidence of their existence came in the altered weather if Diessa Plateau and Wayfarer Foothills, where Ridgefield and blizzards formed from increased temperatures underground, followed by the eruptions of geysers. Then the Alliance struck with fury, slaughtering and enslaving the inhabitants of the assaulted areas.

Of the assaulted places were fahrars, slaughtered mercilessly, charr ranches, norn homesteads, and even the Sons of Svanir were assaulted, though none of them were known to be enslaved. Of the many places assaulted were the second larges norn homestead of the Shiverpeaks, Cragstead, and the largest devoured hatchery of the Iron Legions, North Nolan Hatchery. These assaults led to many refugees fleeing to Hoelbrak and the Black Citadel, until the cities couldn't hold anymore, forcing new refugees to head to Lion's Arch, where they were offered aid and a promised home on Southsun Cove by the Consortium. 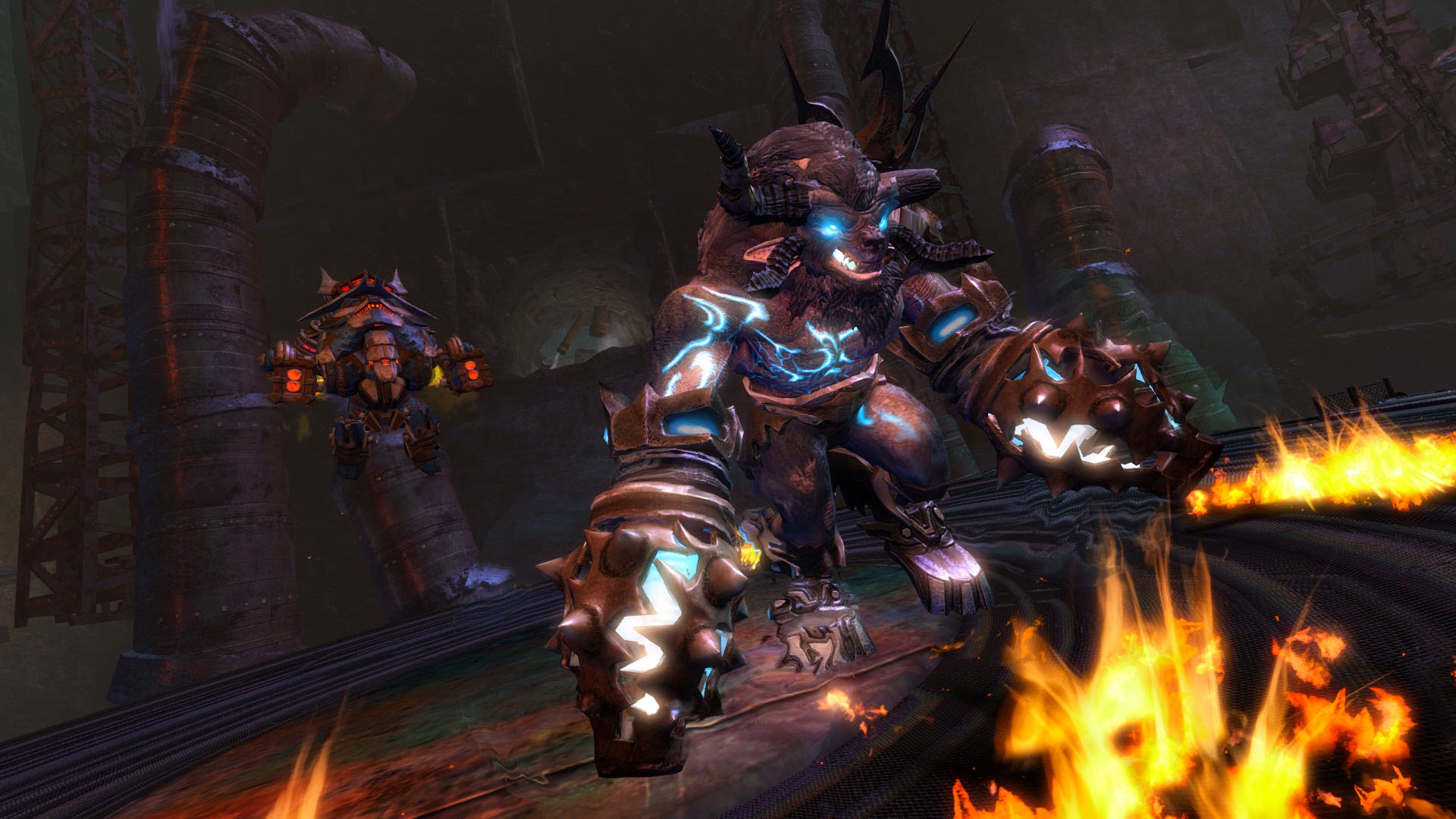 Later on, the Molten Alliance began using Sonic Periscopes (enchanted with fire magic for self defense) to listen on many havens, homesteads, and Iron Legion stations, while beginning to unleash stronger troops formed from their alliance - charr equipped with strengthened steel suits and dredge infused with the same magic as the Flame Legion shamans. And at this time, the Vigil began an offensive against the Molten Alliance as they searched for their hidden bases. Soon enough, Molten Facilities were found connecting to Azurite mines, where the prisoners where enslaved to mine the newly discovered crystals. The Vigil, joined by Braham, Rox, and other adventurers - even the fugitive at the time Canach in separate occasions - assaulted these facilities where even more weaponry was being developed, and freed the prisoners, defeating the Molten Berserkers and Firestorms that led each facility in doing so. With the destruction of their facilities, the threat of the Molten Alliance ended.

Many thought the Molten Alliance was gone after the destruction of their many Molten Facilities and their ever-diminishing influence on the lands became non-existent. Then just as ubruptly as they appeared the first time, they surfaced once more. This time, they did so with Scarlet Briar’s Aetherblades and newly-gained Twisted Clockwork minions during the Queen’s Jubilee in Kryta. This was the first known link between the Molten Alliance and Scarlet, as they appeared in her assaults on the lands from Divinity’s Reach to Ebonhawke.

The Molten Alliance showed again in the beginning of 1327 AE, when Scarlet had unleashed her supposed new weapon testing of the Twisted Marionette, working with Aetherblade and Toxic Alliance to defend the Twisted Clockwork minions as the machines sacrificed themselves to power the Marionette’s self-detonation device, though it failed in the end. 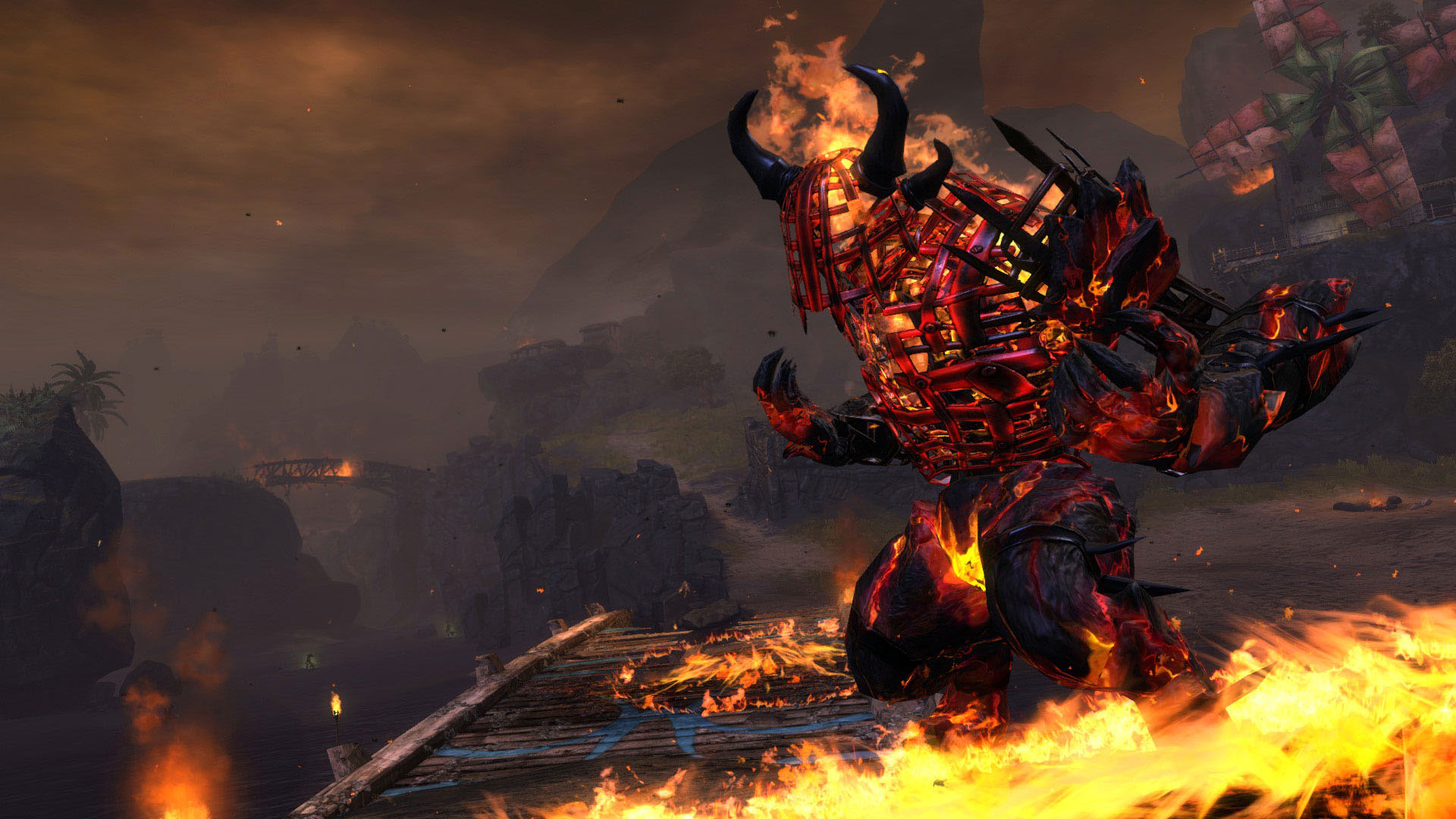 And most recently, when Scarlet assaulted Lion’s Arch, the Molten Alliance were used as shock troops, invading the southern portions of the city from beneath the ground and cutting out crevices around Fort Marriner, burning the crops on Postern Ward, and assaulting Lion’s Gate; all the while establishing Sonic Periscopes along Gunnery Range, directed at Scarlet’s flying drill, The Breachmaker.

One may find it odd that the alliance continues to work for Scarlet, and it may be true for the dredge faction that joined, whom only join in because of the opportunities it presents: more technology, and the chance to ransack Lion’s Arch. The Flame Legion, however, continue to aid in a far more dire situation. The faction that had agreed with Scarlet’s terms had faced defeat and survived, which is frowned upon in charr society – especially with the Flame Legion, as they have been known to strike Imperators’ names from records for great failures. These Flame Legion charr are forced between two options: win big and go home as heroes, or face death should they return as failures still.

Whether or not the alliance will survive the downfall of Scarlet is yet to be seen.