When the fabled Mad King's Day rolled around, something stirred in Kessex Hills of Kryta. A veil of invisibility was erected in the center of Viathan Lake, preventing all who swam too close to the veil from coming close. When the veil was shattered, the massive Tower of Nightmares was revealed and poison covered the land. Thus the Toxic Alliance became known, formed by krait and Nightmare Court. 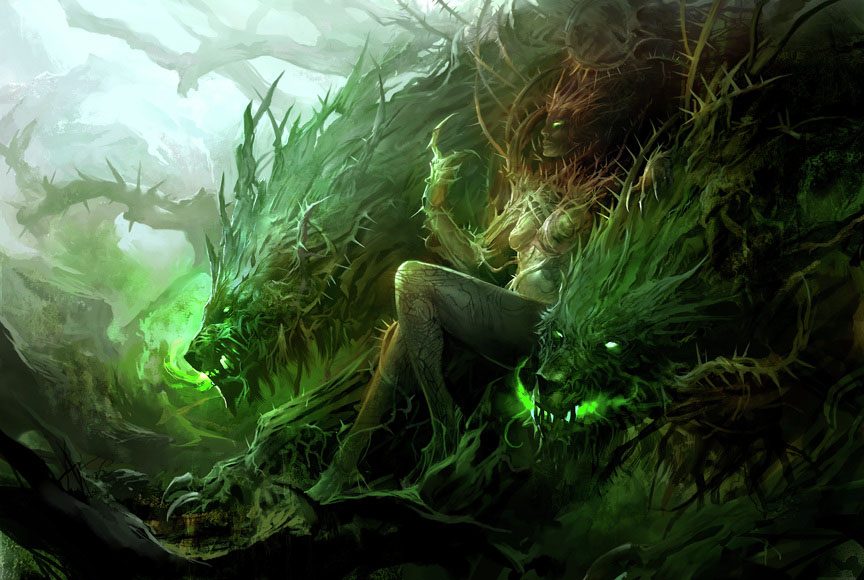 The Nightmare Court is a faction of the sylvari race that takes up about 10-15% of their population in full. Originally made by the first of the Secondborn, Cadeyrn, to make a stance against the Ventari Tablet and be listened to by the Pale Tree, the faction fell to the force which they get their name: the Nightmare. What the Nightmare is, or where it originates, is still unclear. The Nightmare Court seeks to spread the Nightmare, and ranks their members based on their cruel deeds – taking titles after knighthood and gentries, with the highest being the Grand Dutchess, Faolain – a Firstborn who was brought fully into Nightmare by Cadeyrn and usurped him to his disdain. Being less than twenty years old, the faction has little to no notable history to them.

Those that joined the Toxic Alliance were a faction of the Nightmare Court, with no ranked members to the faction other than an unnamed baron and baroness who were killed at the Heart of the Tower of Nightmare. What they sought to gain from the alliance with the krait and Scarlet Briar is still unknown. What is known is that Scarlet made a deal with them to gain access to Twilight Arbor to build her Aetherblade fleet, and that they were sent with a seed and krait obelisk shards to the serpentine race with the threat that if the krait killed or enslaved the Courtiers, their own deal with Scarlet would end. 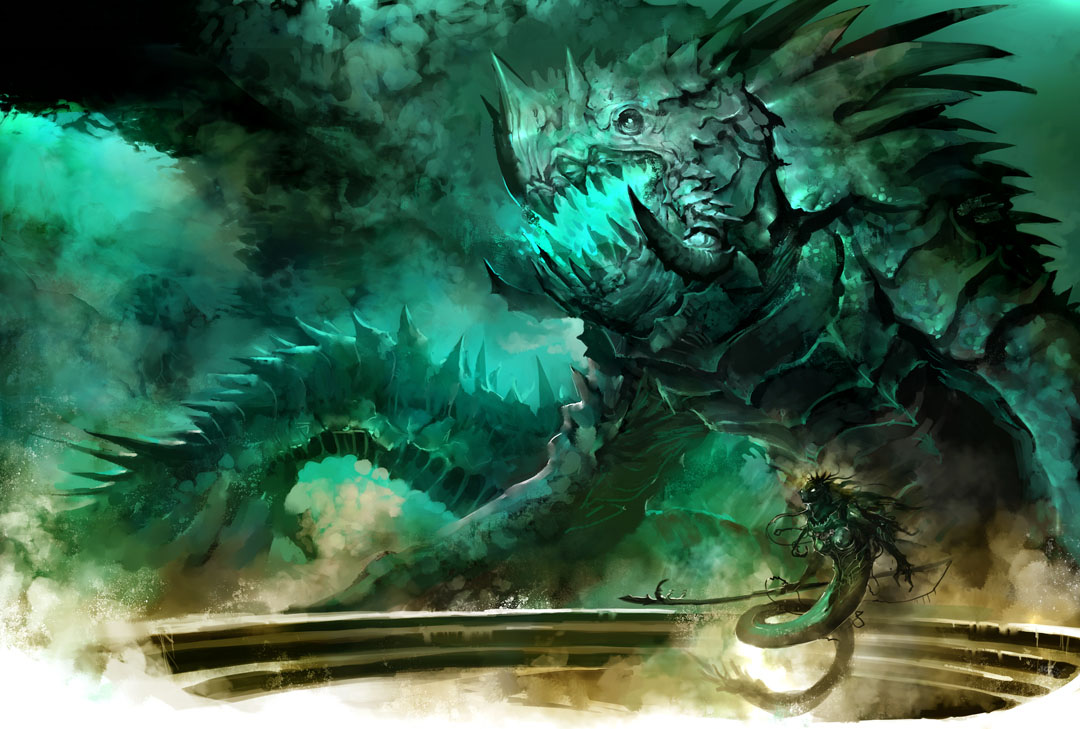 The krait is an old and mysterious race from the deepest depths of the Unending Ocean. Before roughly fifty years ago, they were seen only as raiders on the shores near them, stealing whatever supplies and slaves they needed and could not get from assailing ships traveling the ocean. For as long as their history – or at least our knowledge of their history – has recorded, they have believed in greater beings they call Prophets, and have revered black, smooth obelisks of single stones along the ocean floor as the places where their Prophets rose to a higher plane, where they gather armies from the krait’s sacrifices until they return to the world, flooding it and claiming it all for the krait race.

But their livelihood all changed when the unnamed Elder Dragon slumbering in the deepest parts of the ocean rose and forced the krait into shallower waters. If records of the Priory are correct, then this Elder Dragon rose directly where the krait lived, and forced them first into quaggan territory, then the shores of Tyria. Until this point of time, the krait were undefeated in their known history. They never felt bitter defeat as a civilization and had felt themselves superior to all. Since arriving on the surface they have suffered various defeats throughout in the new land, though still not enough to diminish their morale and fanatic beliefs.

In recent times, Scarlet Briar had sent a missive to the krait, stating she had obtained shards of one of their obelisks and offered them in exchange for allegiance. At first, the krait refused, disbelieving her. When she sent a small shard as proof, they threatened her to bring them all of it else they would kill her; but her fleet of airships prevented this. With rage soon subsided, Scarlet sent the Nightmare Court with more shards (with the premise of their death meaning the deal is off) and promises to make them a Prophet and even more shards; in turn, the krait would plant a seed and guard it as well as mix their magic with that of the Nightmare Court’s.

The result was the Tower of Nightmares.

Witnessed by the local quaggan, Scarlet had given the krait a single seed to plant and guard in exchange for their obelisk shards. They nursed this plant and it grew under the waters of Viathan Lake. When it grew too large to conceal by themselves, the Nightmare Court covered it with an illusion of invisibility. All the while as it continued to grow, the krait harvested the trees along the shores; this is when what was later called the Tower of Nightmares became known.

This illusion that prevented people from moving into the center of the lake was accompanied by higher humidity in the area, and the stripping of Auld Red Warlf. Scholars and adventurers alike were drawn to the curious changes, including the detective Marjory Delaqua and her assistant, Kasmeer Meade. After studying the illusion, it was Kasmeer Meade who unveiled the Tower of Nightmares.

The Tower of Nightmares was a gargantuan plant, its origins still unknown, that had toxic pollen that brought forth hallucinations. The plant was fortified and reinforced by the wood harvested by the krait, creating a structure like their Deeps made from shipwrecks. Planks were laid across the lake for their Courtier allies, who in turn filled the Tower with soil and their deadly spider and wurm pets. Furthermore, the krait within the Toxic Alliance became altered, their skins now glowing a greenish-yellow that dulls out when they die.

From the tower's blossoming flower, spores fell out into the world, planting into the ground as offshoots which were immediately defended by the Toxic Alliance, but because it was smaller, it was weaker and more easily destroyed by the Orders fighting against the Tower. From the roots, too, offshoots and stalks sprouted to further spread the toxins.

Inside the Tower, each level appeared differently, with three main levels. The center was hollow except for the plant itself, and throughout the tower were chambers full of hallucinations. The first level was full of the stalks that came from the roots, including a kind of stalk altered by the Courtiers to explode and spread its pollen in a short but strong burst when others get near. The second level was where the Courtiers put their tortured pets, mostly spiders but some wurms as well, and the ultimate fate of prisoners not sacrificed by the krait. The third and highest level was the most dangerous, as being so close to the plant's pollen it was constantly full of the toxins, and in turn hallucinations - not just the standard hallucinations, either but hallucinations of the Molten Alliance and Aetherblades.

This event was the most peculiar to those invading the Tower, leading some to believe Scarlet Briar or the Toxic Alliance was capable of controlling the hallucinations, and specifically tailored them to the invaders, and to Scarlet, who's voice was heard by the invaders, but the voice never shared. 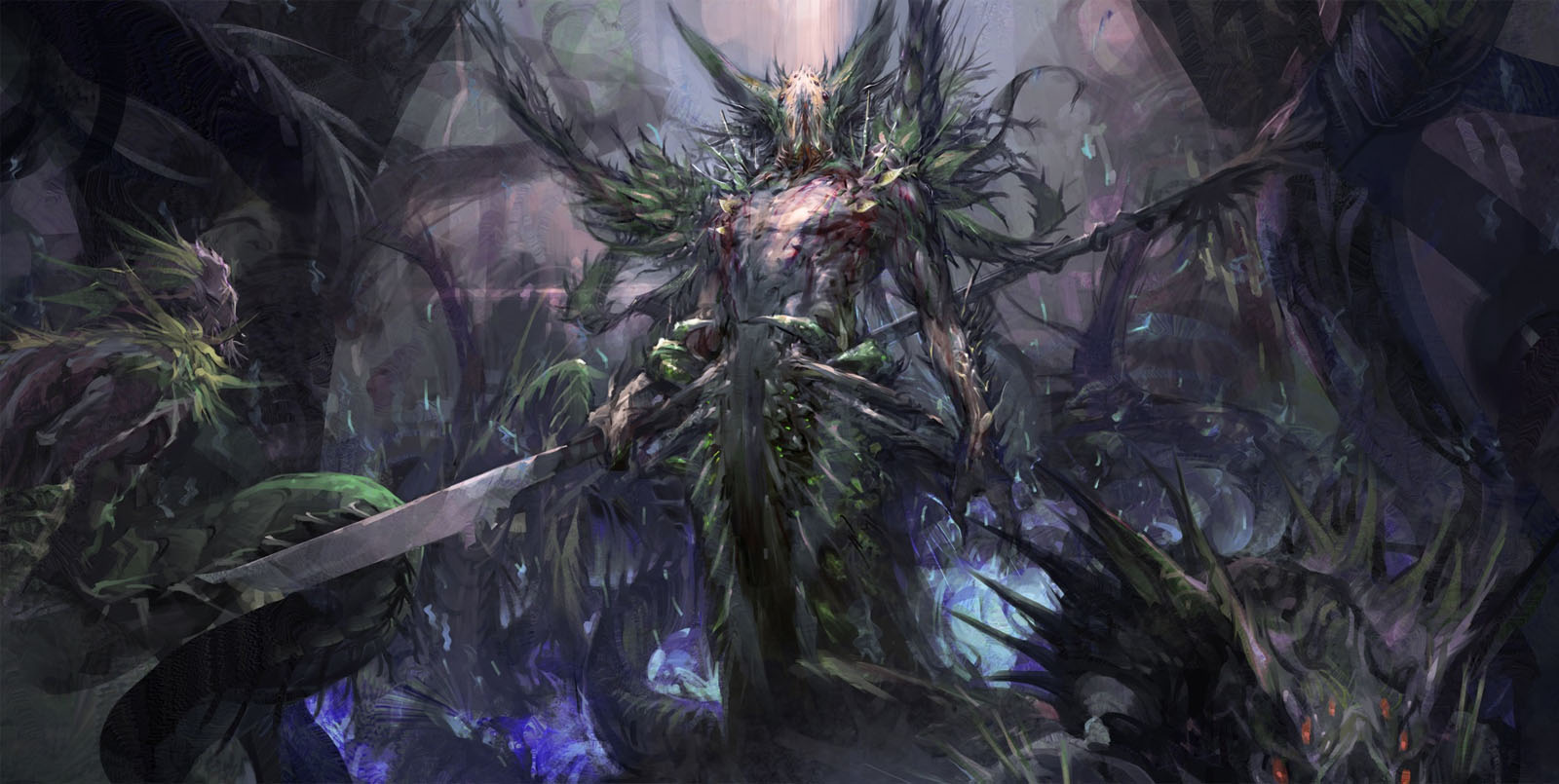 At the very heart of the tower, in the top-most reaches, laid Scarlet’s lab where she stayed, hooded again like at the Queen’s Jubilee, and out of sight of most – if not all – krait. There were also a multitude of glowing pods dangling from the plant, and within the pods was what Scarlet had promised her serpentine allies: beings to call their Prophets. The Toxic Hybrid, the first and only amongst the so-called “prophets” to be birthed by the plant, was a large krait-shaped creature, its skin and appearance much akin to a sylvari. Whether it was a krait-turned-plant, or a sylvari-turned-krait-looking, or even a newly born entity from the plant itself was left unanswered, but it evolved at immense speeds, being born with barely the ability to crawl and make the most primitive of vocal sounds. But within mere minutes, it learned to stand upright, wield weapons – and use them effectively, speak formally, and even cast magic and manipulate the plants of the Tower of Nightmares. It was even aware enough to know that it was the krait’s prophet, and to make perhaps the most confusing proclamation of all within the Tower of Nightmares: that it was the last of its kind.

What that means, if anything, remains just as unknown as what exactly the Toxic Hybrid was.

With the Toxic Hybrid dead, Marjory and Kasmeer had pumped anti-toxins into the tower’s plant, hoping to kill it and end the Toxic Alliance. But a barrier prevented the toxins from taking any powerful effect. But when the key to the barrier was found within Scarlet’s lab, the tower shuddered as its final layer of protection fell, and the two heroines wondered if the plant was sentient, knowing what was about to happen. But with its final defenses down, and the Toxic Alliance’s final attempt to defend the tower failed, the tower shuddered as the anti-toxins flowed throughout its stem, creating a volatile reaction within the plant and utterly destroying the Tower of Nightmares.

After the destruction of their Tower of Nightmares, the Toxic Alliance still remained in the area yet greatly weakened, continuing their experimentation with the toxins and continuing to protect any offshoots that spawned. With the destruction of their Tower, however, the creatures housed within got loose and still survives amongst the wreckage. The poisons still spread in Kessex Hills, but the Seraph and a handful of stationed members of the Orders are working to contain the threat. Do as they might, however, the waters remain toxic and the fish from Viathan Lake and Viathan’s Arm are inedible.

While one may question why the krait continue to serve Scarlet, given that her promise of a krait prophet failed, but the answer lies in the alteration they took to their body. Not just their bodies, however, were altered in whatever made their scales and eyes glow but their mind as well, altered to be less hating of other races, and they hold the mentality of: ‘if Scarlet could make a prophet once, she can do so again.’ However, this change, and acceptance of other races, had led them to become exiled by their people.

Since the Tower’s fall, the Toxic Alliance were seen when the Twisted Marionette was unleashed in Lornar’s Pass, and accompanied Scarlet Briar during her invasion of Lion’s Arch, attacking from the waters and maintaining control of the shores and fields, poisoning the land and killing crops. And in their forces they brought a krait warlock to lead them, along with more spider and wurm queens, though seemingly those are the only pets of the Nightmare Court.