With the first season of the Living World over and done with, many of us were still left with several lore-related questions unanswered. In search of some answers, we've taken these lingering questions to Angel McCoy and Scott McGough; two of ArenaNet's finest lore buffs, and members of the narrative team. With topics ranging from the karka and the Toxic Hybrid, to Scarlet's alliances and Mai Trin, you're sure to learn more about what's been happening over the last year and a half.

GuildMag: During The Lost Shores, Zommoros hints at the age of the aquatic races mentioned (Hylek, Quaggan, and Largos) – calling at least one of them ancient; and he makes mention of knowing the karka from a time when the continents were a different shape. Furthermore Matthew Medina in a forum post around the time of the release stated that the karka had experienced dragon corruption before. Just how old are these five races and where any around during the previous Elder Dragon awakening?

Zommoros was speaking in typically grand and poetic fashion when he called out that the karka have been around for a long time. Zommoros suggests players interview "the aquatics, those that swim and have swum since ancient times" to find out more about the karka, but that doesn't necessarily mean those races (hylek, quaggan, largos) are old enough to have experienced dragon corruption first-hand. There's ancient, and there's *ancient.*

As the karka aren't capable of speech, it's very difficult to accurately gauge how long they've existed, or if they have any Elder Dragon experience. Zommoros is powerful and wise, but he's not always a reliable source. Levvi and others will have to dig deeper into the karka's history before Tyria can declaratively state exactly how long they've been around.

GuildMag: In The Secret of Southsun and Last Stand at Southsun, some strange tentacles were added to the Karka Hive. On top of that, there was the Sclerite Backpack featuring similar tentacles. The only bit about the deep sea dragon is that it twists water into tentacle minions; are these tentacles tied to the deep sea dragon, or to the karka? Neither? Both?

Short answer: neither. Long answer: only to the karka, and only kind of. The tentacles on the karka hive and the Sclerite Backpack are meant to be evocative of the effect Canach's Fervid Censer toxin had on the island's inhabitants, especially the karka. 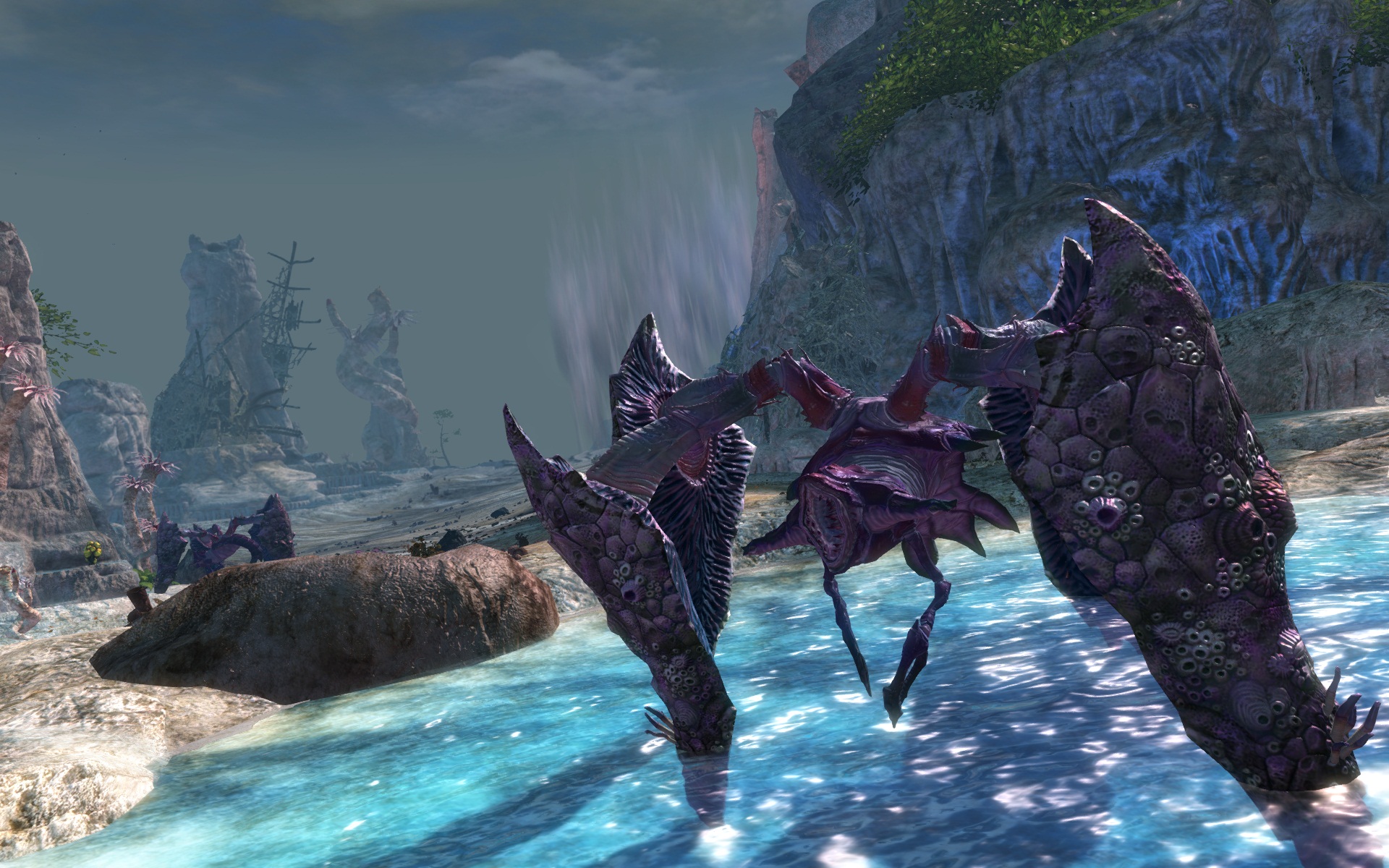 GuildMag: While most of the other members of Scarlet's alliances were known beforehand, the Aetherblades have been a completely new entity. Before Scarlet linked them with the inquest to give them stolen airship and lightning-based technology, just who were the Aetherblades? Were they a single pirate group under Mai Trin or some other leader even before Scarlet approached them? Were they recruited as individuals from the pirate and outlaw community in general, or formed through the amalgamation of several smaller bands? Or is their background something else, possibly even one that is a total mystery to the inhabitants of Tyria as well as us players looking in on the game world through our limited filter?

The Aetherblades started out as a particularly greedy and bloodthirsty pirate crew in which Mai Trin held high rank; when Scarlet found them and presented them with Inquest magitech, they became far more dangerous and far more successful at the business of pirating. Officers like Mai kept the Aetherblades organized and active, and their ranks swelled as more and more unaffiliated pirates and pirate bands signed on, lured by the promise of easy money and power. Once they were in they found it problematic to get out again, as Scarlet had plenty of work for them to do and kept them hard at it or they'd face her wrath.

GuildMag: It's never revealed - yet at least - why the Nightmare Court splinter group joined Scarlet; this is a bit weird since Scarlet has expressed distaste for both Dreamers and Courtiers, though it's clear she went to them for their knowledge in plant altering magic. But why did they agree to work with her?

The splinter group of Nightmare Courtiers that worked with Scarlet did so to further the main objective of their organization: adding more Nightmare to the Dream. What a better opportunity to do so than to join with Scarlet and spread terror, destruction, and death?

GuildMag: In The Nightmare Ends instance prior to the fall of the Tower of Nightmares, we find a note indicating that Scarlet has a particular dislike for humans for "getting in the way". Is this simply referring to the Shining Blade preventing her from nabbing Jennah during the Jubilee, or is there something deeper there?

This line is an expression of Scarlet's superiority complex and her habit of treating anyone that isn't part of her plan as an annoyance. She also has a long-standing disdain for humans, who collectively (in her view) have not made the kind of magi-mechanical advances the asura or charr have (evidenced by the fact that as Ceara, she never studied or sought to study with human engineers before she became Scarlet).

That said, yes, it's also in part due to the Shining Blade interfering with her plan to take Jennah hostage (and winding up with Lord Faren instead).

GuildMag: What, exactly, is the Toxic Hybrid? Also on the Toxic Hybrid – during the fight, the Hybrid says “No! I cannot be the last of my kind” and yet by all appearances, it is the first. What exactly did he mean?

The Toxic Hybrid started out as a regular krait that was transformed while inside the tower. It thought it was being transformed into a Prophet. Perhaps it was. Perhaps it wasn't. We may never know, but the krait believed it was. Not only did players stop them from creating any more of these monsters, but they killed the one that had been made.

The Toxic Hybrid spoke those words because it is the first and last of its kind. It's expressing shock and dismay as it dies, as it expected to be the first of many such monsters to emerge from the tower.

GuildMag: What was the point of Scarlet’s many invasions? Just general chaos, or something more? They weren't even touched upon as of late.

Scarlet's invasions were a series of tactical plays, each leading toward the eventual assault on Lion's Arch. She tested her armies and devices, confiscated materials, and built fear in the hearts of Tyrians. In her grand finale, she invaded Lion's Arch in order to gain unhindered access to the ley lines beneath the city, so that she could poke the dragons with it. The repercussions of her actions have not yet fully played out.

GuildMag: We don't seem to see Mai Trin in the invasion of Lion's Arch. Nor do we ever see any named leader of Scarlet’s other alliances. Where were they during this time?

Mai Trin remained in the Edge of the Mists map, mustering, staging, and sending out Aetherblades for the big attack on Lion's Arch. It remains to be seen if she will stay there now that Scarlet's out of the picture.

Leaders of the other alliances were in similar situations, and tasked with making sure their followers showed up to crush Lion's Arch in overwhelming numbers. The only reason people know Mai Trin's name is because she got caught. None of the other leaders have been caught, and thus, they remain a mystery.